Land Use Planning: Where Do We Draw the Line? 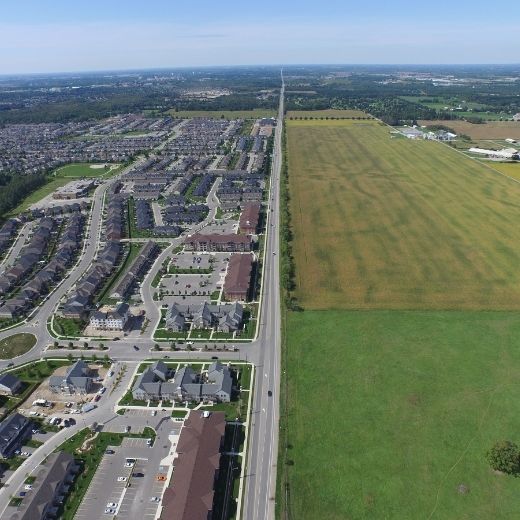 Hosted by Ontario Farmland Trust, this year’s Farmland Forum brought together municipal planners, farmers, NGO representatives and others to discuss the theme, “The Shifting Landscapes of Farmland Protection.” CFFO was pleased to sponsor this informative event.

Doyle is a former manager in the Ministry of Municipal Affairs and Housing who played a role in developing the Greenbelt. During his presentation, he addressed key questions about the usefulness of Ontario’s existing planning tools, particularly given the pandemic disruption.

He mapped out a brief history of recent land use policy in relation to farmland protection, using shifting density targets, among other data, to illustrate the problem we face today.

The Greenbelt Plan in 2005 prohibited the conversion of prime agricultural land within it, but abandoned important farmland surrounding it. In 2006, the Growth Plan for the Greater Golden Horseshoe set greenfield density targets at 50 people and jobs per hectare (PJH). Eighty PJH is the number at which transit infrastructure becomes economically feasible, so this number is relatively low. The result was an increase in single housing units and a relaxation of urban intensification efforts.

In 2017, a Provincial Plan Review found that farmland conversion within the Greenbelt was almost completely halted, but that it continued in the rest of the Greater Golden Horseshoe. The loss of farmland was troubling, and government increased greenfield intensification targets to 80 PJH and committed to developing Agricultural System mapping to better protect farmland in the region.

By 2019, the pendulum had swung back again: greenfield density targets were reduced through the Housing Supply Action Plan to 50 PJH in major cities and 40 PJH elsewhere. Municipalities were also encouraged to seek reduced targets and to forecast their land use needs up to the year 2051. Doyle noted the difficulty of projecting land use needs that far into the future. The disruptions of COVID-19 alone illustrate that difficulty. Nevertheless, the result of this policy has been that municipalities are slating far more land for development than is likely to be necessary.

Ontario has used land at half the rate anticipated in the Provincial Plan, which means there is already a glut of land approved for development. There is no need for more. Doyle concluded that, at this stage, protecting the land base should be our top priority.

He offered several recommendations for protecting farmland for the future. Firstly, he advocated for hard urban boundaries. Establishing hard boundaries puts the onus on municipalities to look within their borders for development areas, rather than placing the responsibility on farmers to protect farmland from encroachment.

As Doyle pointed out, “We can’t abandon farms at the edge of urban development, because there will always be another edge.”

He also recommended a number of actionable changes government could make to reduce the threat to farmland, including stopping construction plans for Hwy 413 and the Bradford Bypass, as well as restricting farmland ownership by institutional investors, which has increased land speculation. Finally, he argued that Ontarians, including our politicians, need better information about the necessity of protecting our province’s food security and environment.