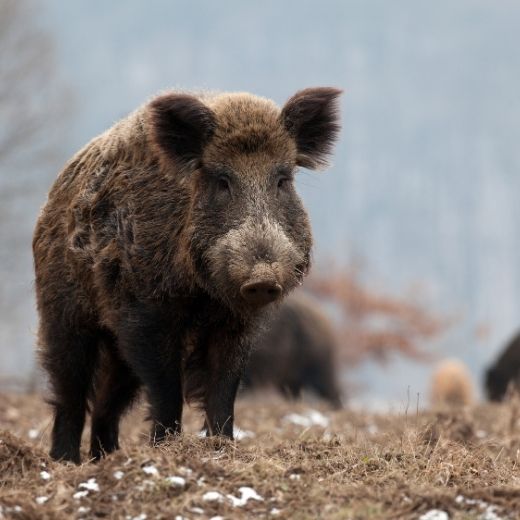 Driving past a cornfield a month or so ago, I noticed a quite a bit of racoon damage. This is not unusual, but at the same time, I wondered about total crop losses in Ontario.

Wildlife damage to crops in our part of the province, Grey-Bruce, is done by racoons, deer, beavers, and at times by geese or sandhill cranes. With more specialty and high-income crops being grown, the financial losses are ongoing.

CFFO continues to participate in discussions about wildlife damage as part of the Agriculture-Wildlife Conflict Working Group, hosted by OMAFRA. At a recent meeting I attended, participants were updated on another growing concern, which I had not heard was a problem here yet.

Presenters from both OMAFRA and the Ministry of Natural Resources and Forestry (MNRF) updated the working group on the threat of wild pigs, mostly moving north from the United States. In Saskatchewan, for example, these animals are already responsible for a lot of damage to crops and natural diversity.

Wild pigs include a variety of undomesticated swine: Eurasian wild boar, domestic pigs and hybrids. Domesticated pigs who escape outdoor housing, for example, can go feral in short order if not found.

Groups of wild pigs are prolific, long-lived and adaptable to the cold Canadian climate. It can be dangerous to hunt them, as other animals in the group will attack you. And the list goes on: they are clever escape artists, whether hopping over or digging under fences. With weights of over 200 pounds, these animals are not very welcome visitors anywhere.

In recent years, small groups have been sited here in Ontario, primarily in southern and eastern parts of the province. Experts in both ministries are concerned that wild pigs may be the next big environmental and agricultural mishap to come.

There are several things farmers can do. First, prevention is very important, and trying to find escaped domestic pigs is a good start. Farmers will also want to protect crops and livestock from wild pigs, which may cause damage and spread disease. If you’re starting to think fencing, you guessed right. OMAFRA has a helpful factsheet on fencing options particularly for outdoor pig production, which can be found online.

Because wild pigs tend to flourish in agricultural areas, farmers can also help researchers keep track of populations by reporting any sightings. More information on wild pigs and how to report them can be found at Ontario.ca/wildpigs.

It’s sobering to consider that groups of wild pigs can be found in some European cities. We are still in early days here in Ontario. It’s important for us to help prevent the growth of this invasive species.