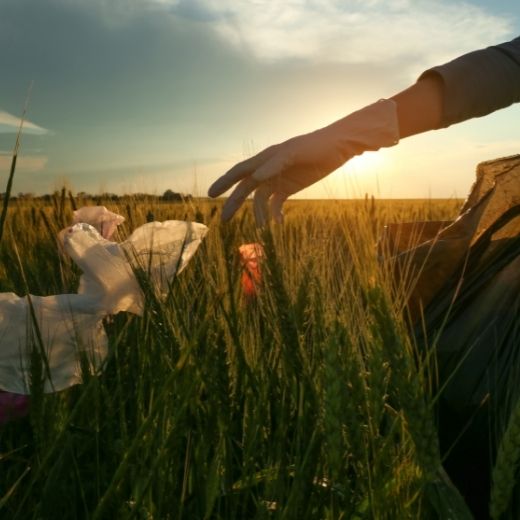 Wednesday mornings always seem windy at the end of my laneway. That’s because it’s garbage day, along with recycle pick up. Those recycle bins typically have material above the tops and the wind enjoys blowing it around, usually into the field where it gets caught in the growing crops.

Trash in Fields Ends Up in Animal Feed

A member recently raised the issue during a meeting of CFFO’s Provincial Council. He was deeply concerned about the trash and recycling ending up in his fields. It can be nearly impossible to prevent this problem along roadside fields, and as a result, he has found chopped-up aluminum in his silage.

Debris, whether tossed in the ditch by passing drivers or blown out of recycling bins by the wind, could end up causing serious harm to farm animals.

Apparently, he and I are not the only ones with this problem. As stray litter has become an increasing concern, many municipalities are adapting their recycling programs to reduce the problem. For example, Simcoe County recently introduced heavier, wheeled bins with lids. This is a good option for many; however, it comes with the cost of trucks with hydraulic unloading arms and new bins.  Durham Region has been looking at retrofitting existing recycling bins with “crumb ridder lids,” a less intensive approach to reducing windblown litter.

These municipal solutions could go some way to reducing litter along rural roads. But can more be done about the trash tossed out of vehicles?

Awareness has greatly reduced the litter along roads, but the job isn’t done yet. We can probably assume that no one really intends harm to animals by tossing a can out their window. Likely, they aren’t even aware that there is the potential to cause direct harm. Unfortunately, it does occur. Metal in the feed can cause serious harm.

Resolving this issue will require communities or municipalities to take action. The first thing is to ensure that we understand the issue. We are all aware of what happens with litter in oceans: sea animals often get entangled in it. Similarly, citizens need to be aware that tossing out rubbish along roadways, or allowing recyclables to escape their blue boxes, has consequences.

With municipal garbage, recycling and compost pick up becoming a norm across the province, citizens need to take responsibility for their waste. In my county, Brant, there’s a bylaw that places the responsibility of managing refuse on me. Authorities may take action if I do not. This is probably similar to many other municipalities across Ontario and therefore, as citizens, we must meet our responsibilities. Let’s help keep Ontario beautiful.