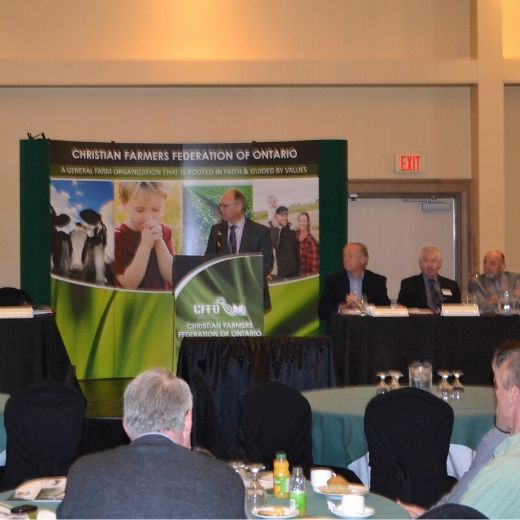 The Christian Farmers Federation of Ontario (CFFO) saw a spate of acclamations during the 2018 Annual Meeting, as candidates for the CFFO’s Executive Board stood ready to serve.

This year, President Clarence Nywening and Vice-President Richard Blyleven both ran uncontested and were acclaimed at the meeting, held in held in Kitchener last week.

Nywening, who owns a broiler hatching egg farm near Thamesville, will remain president for a third year. Blyleven, an egg farmer near Cayuga, has been serving as vice-president since 2015. Both served as directors on the CFFO board before taking on their current roles.

Three directors to the board were acclaimed at the meeting as well: Ed Scharringa of the Rockton area; Simon de Boer of Tara; and Frank Hoftyzer of Hastings.

This will be Hoftyzer’s first term on the CFFO Executive Board. He has been involved with many boards in the past, including the Ontario Soil and Crop Association. Scharringa and de Boer have both served a number of terms on the CFFO Board.

The CFFO Executive Board and staff welcomed elected district leaders of the CFFO for the Annual Meeting and Leadership Summit, which focused on building agricultural community action on water stewardship issues.