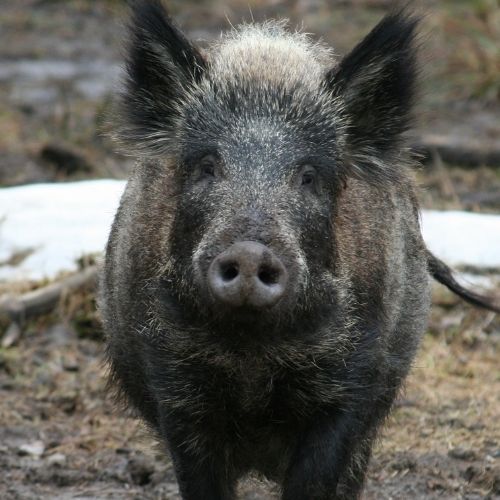 The discovery of a group of wild pigs north of Pickering in November garnered national news attention and put a stronger focus on how to deal with the invasive species in Ontario.

These pigs are not native to North America. They pose a threat to humans, domestic animals, crops and the environment. And they’re extremely prolific. Sows can have two litters a year and, once established, populations are nearly impossible to eradicate. Ryan Brook, a University of Saskatchewan researcher who’s been studying the species for years, calls them an “ecological train wreck.”

If left unchecked, wild pigs could spread the dreaded African Swine Fever here. That highly communicable and fatal disease infected millions of Chinese pigs in 2018, causing a massive population cull and serious economic damage. Besides carrying disease, wild pigs root around fields, destroying crops. They damage natural habitats for many birds and mammals. They are a clear and present danger to farmers, our livelihoods and society at large.

Fortunately, the Ontario government has developed a comprehensive strategy to deal with the issue. There are four main objectives. The first is to prevent pigs from being introduced into the natural environment. Among the actions is help for farmers who keep pigs outdoors so that they can prevent escapes. Wild pig hunting has been prohibited because it’s been proven in other jurisdictions that the remaining animals are wilier and, along with their ability to multiply quickly, populations actually increase.

A second objective is to address the risk posed by Eurasian wild boars. As of January 1, 2022, it will be illegal under the Invasive Species Act, to import, own, transport or sell Eurasian wild boar and their hybrids. There is a small number of Ontario farmers who, in the past, imported these animals to raise as an alternative meat. The province has set up a program, run by Agricorp, to help them transition to heritage pig breeds, other livestock or crops. Farmers who apply could be compensated up to $200 per animal. Applications will be available until January 14, 2022.

A third objective is to remove the wild pigs that are already in the natural environment. In 2018, the government set up a program in which the public is encouraged to report wild pig sightings. In a recent report, the Ministry of Northern Development, Mines, Natural Resources and Forestry found that an average of nine sightings have been reported per month. Government staff followed up and found that most wild pigs had escaped captivity. Fortunately, there’s no indication yet of a self-sustaining population.

Finally, Ontario is ensuring that knowledge and expertise about combatting the wild pig problem is shared across ministries, provincial governments, industry and academia.

As we move into 2022, it’s good to know that everything possible is being done to prevent wild pigs – and their terrible consequences – from getting established here.