Mike and Angela Scharringa own Dutch Mill Gardens, an outdoor cut flower farm near Lynden. Their “Taste of Country” bouquets are sold to wholesale distributors and grocery stores across Canada during the summer and fall months. 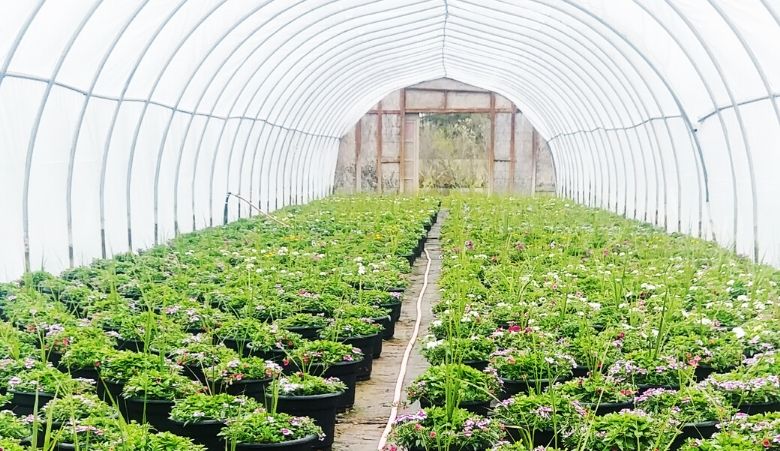 Mike’s parents, Ed and Elaine Scharringa, started the family-run business in nearby Millgrove in 1985. They grew vegetables, bedding plants, and cut flowers on 60 acres, specializing in sunflowers. The couple sold bouquets at the Ontario Food Terminal and eventually expanded their market across Ontario and into the US. Today, Mike continues to serve many of his parents’ original customers.

Mike joined the business in 2002. Six years later, they moved operations to a 100-acre farm in Lynden, where Mike and Angela now live with their four children, Faith, Joel, Leah, and Louis, aged 7. (Yes, quadruplets.)

Today, Mike works with his cousin Nick. They employ a staff of up to forty seasonal workers and farm 450 acres of cut flowers, bedding plants, and cash crops. Most of the land they work is kept in a sunflower-soybean rotation; fifty acres are used to grow other assorted flowers, including dahlias, celosias and ornamental cabbage. With an eye on current trends, Mike and Nick recently planted 15 acres of peony bushes, which will be ready for production in a couple years.

On average, they’ve seen about 20% growth annually. Growing the business is top of mind for Mike, especially given recent challenges in Ontario’s business climate, like the minimum wage increase, the carbon tax, and rising hydro costs.

“We have to do more now to make the same money,” Mike comments. “There are two ways to make the same amount: you either cut costs or you get bigger.” He has found that for some businesses, like Dutch Mill Gardens, it can actually be easier to grow the business than to finding cost savings. Mike is currently expanding their on-farm warehouse to make room for more processing equipment and coolers to accommodate future growth.

Mike’s business sense is closely linked to his values. He believes that farmers are called to care for the earth, and good practices now will ensure that his land can be farmed well into the future.

A few years ago, Mike invested in extensive soil mapping to improve his field management. “I wanted to optimize what we’re doing with our land, to optimize our crop,” Mike says. “We learned a lot of things that we’re still working to adjust. Some things are hard to change, like habits we have that have created compaction, for example.” Thanks to soil mapping, Mike has been able to adjust on-farm practices to limit compaction, such as designating “drive rows” for field equipment.

Looking out across his backyard in May, scanning the field that will soon be awash in the yellows and greens of thousands of sunflowers, Mike reflects on future plans outside the 2019 growing season. The Scharringas are hoping to start fostering infants, something Angela has wanted to do for some time.

Mike jokes that it’s taken him a while to get on board with the idea returning to the diaper stage—and considering they had four in diapers at once, it’s no wonder! “But there’s a need out there,” Mike observes. “We’re blessed. We have this house, we have the room, we have the financial ability to do it, so why not?”

Then Mike—forever the farmer—chuckles, “But I hope we can wait until after the season.”